Can a rock star become a Technology Entrepreneur? 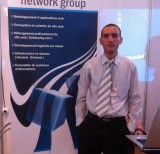 I think that in many ways tech entrepreneurs are the new rock stars of the world, due very much to a few interesting trends in the U.S. and globally (such as) the success of exciting Web startups … and the fact that they are led by cool, innovative and young guys who make them look like rock stars that others want to be like. They are inspiring, smart, fun and successful. That inspires many to say “I want to be that person, too!” … The upside of the recession was the birth of many more startups and entrepreneurs inspired to bring ideas that they are passionate about to life. The media likes to highlight startup success stories and make them ‘sexy’ and it helps entrepreneurs to be even more popular. People like to be around successful people and learn from them so they might become successful, too.

I want to share with you the story of Robert Frederick Zenon « Bob » Geldof, (born 5 October 1951) is an Irish singer, songwriter, author, occasional actor, and political activist. He rose to prominence as the lead singer of the Irish rock band The Boomtown Rats in the late 1970s and early 1980s alongside the punk rock movement. The band had hits with his compositions « Rat Trap » and « I Don’t Like Mondays ». He co-wrote « Do They Know It’s Christmas? », one of the best-selling singles of all time, and starred in Pink Floyd’s 1982 film Pink Floyd – The Wall as « Pink ». Who become a famous technology entrepreneur in United Kingdom.

Bob Geldof says technology, for better or worse, is the battleground for ideas and the economy 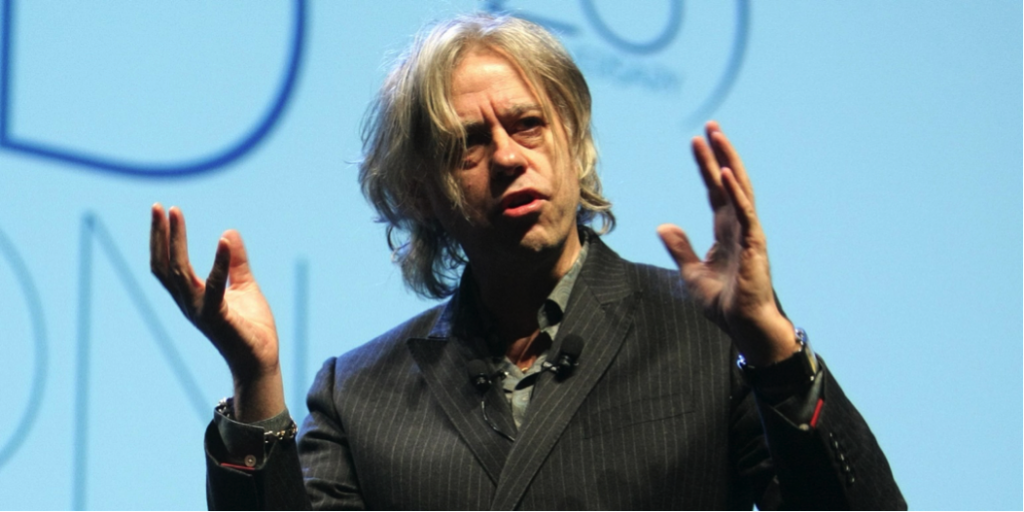 And in the middle of it is the Irish singer, with visitors surprised to see his craggy rock-and-roll features among the giant screens and gadget adverts.

But he’s no techno kid. He brandishes what must be the world’s oldest functioning mobile phone and says it does everything he needs, describing it as the « AK47 of mobile telephony ».

« I’m in odd places in the world, where there’s no power. This lasts five day. All I want it to do is get a signal. »

Geldof is here as co-founder of an educational technology firm called Groupcall. This provides a service for schools to send text messages to parents if pupils are late or missing or any other reason that schools might need to contact families.

Running a tech firm, he says is « like being in a band », it starts off with something small and then grows. « Intellectually, it’s good fun. » 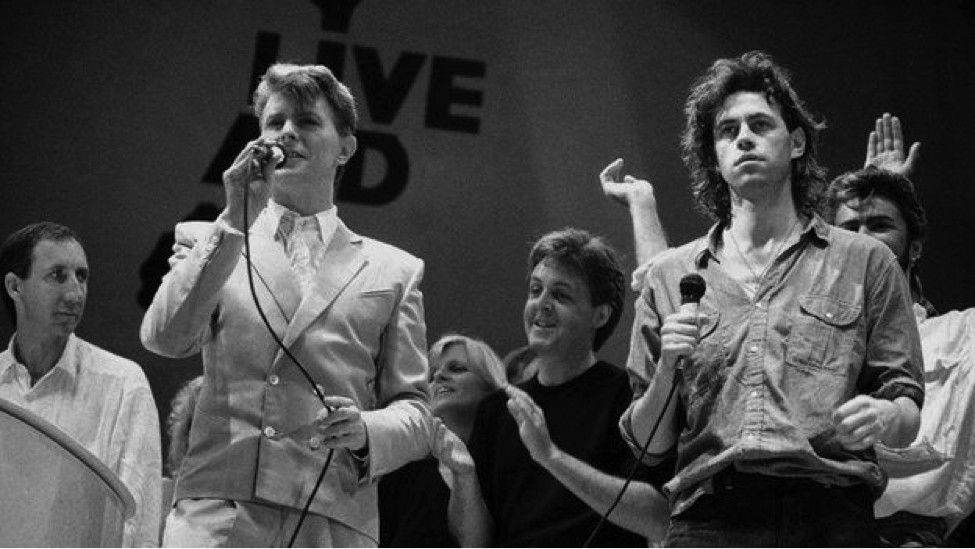 He describes himself as an « autodidact », self-taught rather than the product of formal learning.

« I was never interested in academia, I never got any exams, I never went to college. But that isn’t what interests me. »

He is a scattergun of eclectic ideas, punctuated by some really energetic swearing.

He talks about his passion for the poetry of WB Yeats and how much he would have liked to have met the radical women of early-20th Century revolutionary Ireland. 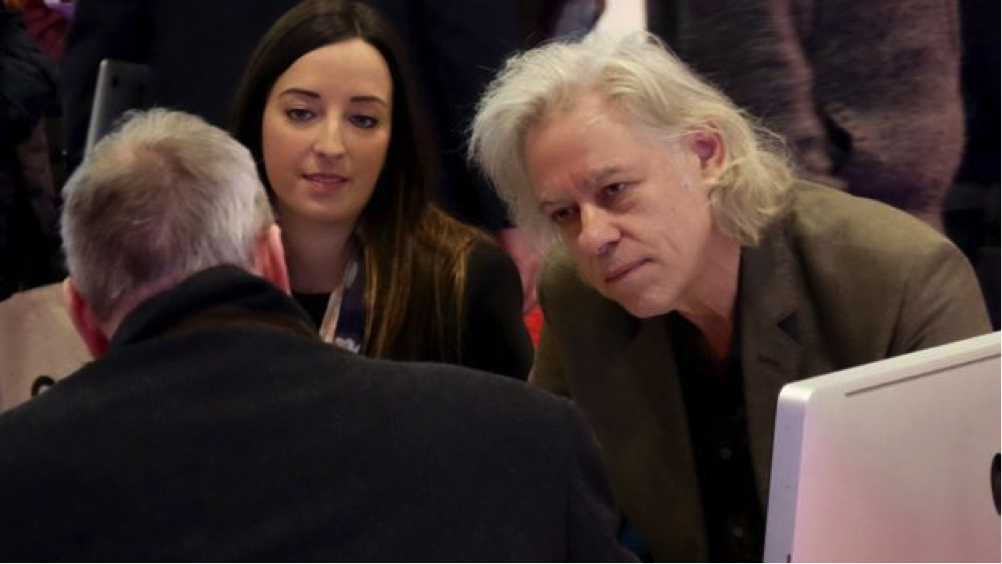 And he tells a story about how in 1978 the Boomtown Rats turned down $100,000 to play a company event in California, proposed by a young tech entrepreneur called Steve Jobs.

« It was a lot of money and they were being hip and cool. »

But he said the punk band told Apple: « We don’t do corporates. » With some more lively language added to the sentiment.

The practical side of technology might elude him, but he is fascinated by its far-reaching implications.

Steve Jobs in the late 1970s wanted to be "hip and cool" by hiring a punk band, says Geldof 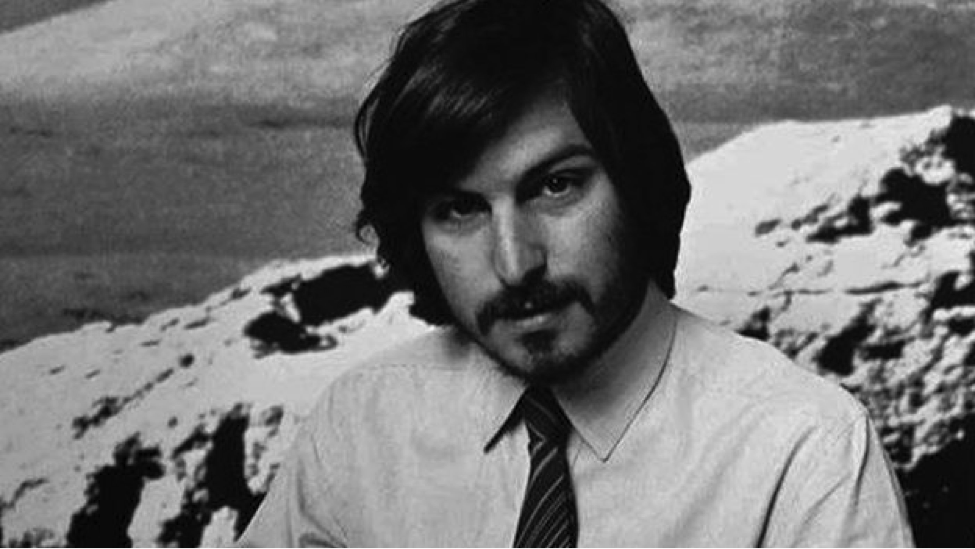 Whether it is a « clash of ideas » with « medieval fundamentalists » or creative industries trying to « re-invent the economy », he says the internet is going to be the battleground.

« It seems to me that technology will mediate a lot of that. »

The accelerating development of artificial intelligence could change the future of humanity, he says, or else « wipe ourselves out, which is not off the cards ».

He likens the internet to Gutenberg’s invention of the printing press, saying he might have « just been trying to make a buck », but the technology set off a chain reaction, democratising knowledge and changing politics and society.

He says his interest in computers goes back to the 1970s.

« I remember Bill Gates saying everyone would have their own computer – that’s why I wrote the ‘silicon chip inside her head’, » in the lyric of the Rats’ big hit, I Don’t Like Mondays. 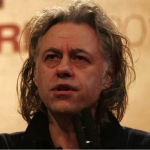 « I thought it was really interesting that memory – the thing that constructs self – was being put on a piece of sand.

« So William Blake had suddenly become real, when he wrote ‘To see the universe in a grain of sand’, and that was very romantic to me. »

His firm’s technology helps schools and parents to keep track of children. And he says he is keenly aware of the balancing act between keeping people safe and an overbearing sense of constant monitoring.

Geldof says he can’t stand the « nonsense » of behaving as though all strangers are predators and says he hates it that adults are afraid of helping a child lost in the supermarket.

But he says technology can help make sure that parents know when there is danger, like a pupil not arriving at school. And it can block inappropriate websites.

« If we can guarantee parents that their children are not going to be able to access sites of brutality and murder, of medieval death cultism, then I’m there. »

Geldof, peering through his shaggy hair like an esoteric springer spaniel, doesn’t much resemble the other corporate tech sellers at the show.

He might be a businessman now, but he still has the Sulphur of the heroic age of rock and roll, before pop stars became hedge fund kids with banjos.

The digital economy will bring « bewildering » changes, he says, creating its own « backwash » of disruption.